Though "selfie" is a relatively new term, photographers have been taking self portraits since the 1800's when the daguerreotype was the latest imaging technology. For my selfie, I wanted to try something I had never done before: photograph a naked model in the shower. Now that I've done it, I can honestly say, it's not as glamorous as it sounds, but it was a lot of fun. Well, it started out being fun while the water was warm, but when the lens fogged up, I had to switch to cold water and open the bathroom door wide open. Fortunately, the only other person home was my wife Janice, and since she's seen it all before, she wasn't surprised by my lack of clothing or the fact that I had set up a tripod, camera, and lighting over our toilet. Just another day in the life of a photographer. To learn more about how I took this shot, keep reading below the photo. Oh, and don't worry about scrolling down the page. Only my face is showing. 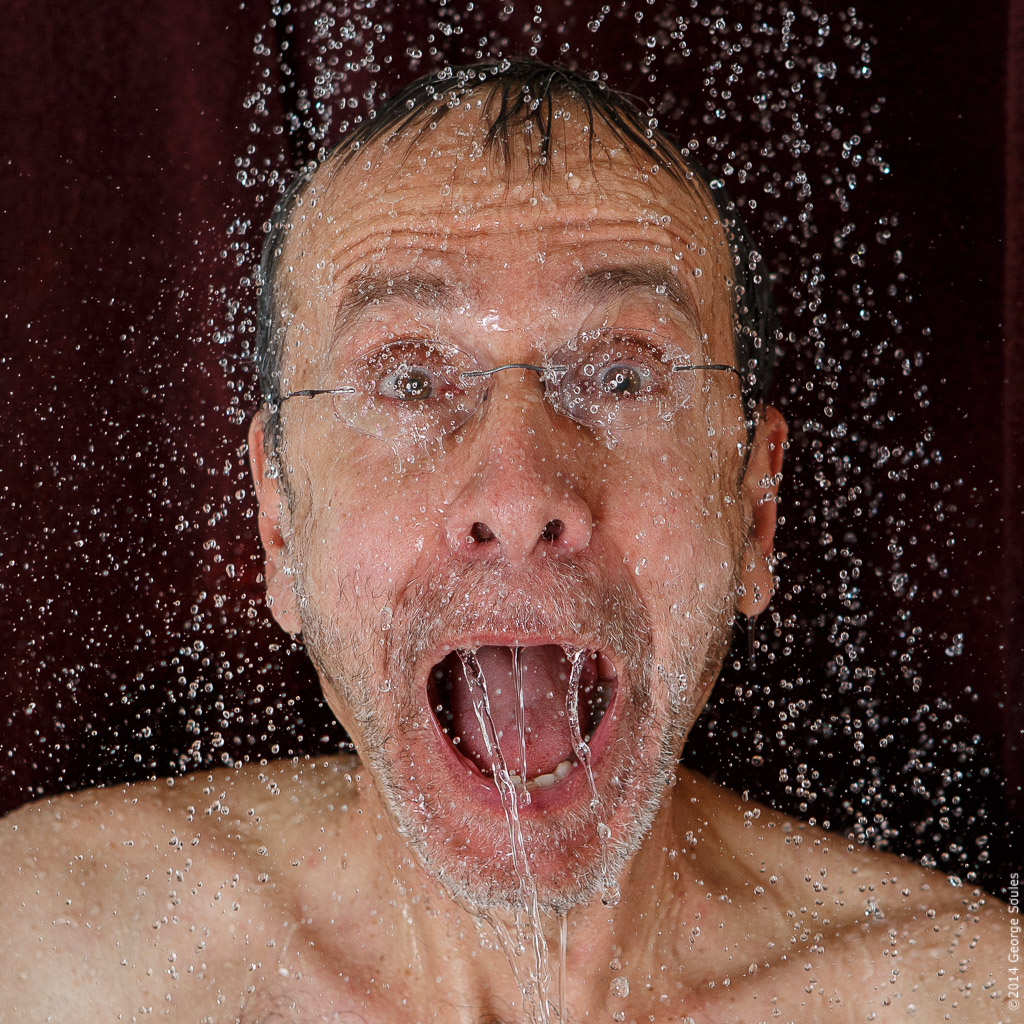 Our bathroom is small and to keep my gear a safe distance from the water, I had to set up the tripod on the wall opposite the shower. In that position there was no room for me get behind the camera to look through the viewfinder or even see the LCD. In order to focus, compose, and change settings, I used a CamRanger so that I could do all of those things from an iPad that I placed on the sink. Once I had everything set and started shooting, I was also able to view the images on the iPad. To fire off the shots, I used a radio controlled shutter release. I put the transmitter in a zip lock bag and was able to press the button while in the shower.

My primary goal for this picture was to freeze the water droplets, but I also wanted some dramatic portrait lighting. The light source was an Einstein E640 studio flash mounted on a short stand at camera left, pointing away from the shower and bouncing back at me off of collapsible white reflector that I propped up on the toilet paper holder. The backdrop is a dark maroon towel that I hung in the back of the shower over the white curtain. It also served as my timer; when it got so wet and heavy that it fell in the tub with a thud, I stopped shooting.

For the camera, I used my Canon 5D3 with a Canon 24-70mm lens at 70mm. That was actually too wide which meant I ended up having to crop the image quite a bit. I should have switched to a longer lens, but that would have meant changing the set up, and well, let's just say it would have been awkward. Next time I'll do it differently. I think I'll also use someone else as the model.

To keep the water droplets from getting blurry, I made sure that the exposure would not be affected by the light coming through the window. I did that before I got wet by shooting some test frames without the flash until I got a nearly black picture. The settings were ISO 400, f/4.0, and 1/250 sec. With no ambient light, the flash needed to do all the work, but I also wanted it to fire at low power to get the shortest duration. That's why I was using the powerful Einstein instead of a little speedlite. To get the right exposure I had to bring the power up just a little from the minimum setting, but at that low power, the strobe fires for only 1/12,000 sec which was fast enough to freeze the action. Also, at such low power, that flash recycles almost instantly which let me take shots in rapid succession.

It took some effort to set up this shot, but I'm glad I did it. It was a good time and I really like the result. I have some other selfie ideas I'd like to try out, but rest assured, I'll be fully clothed for those.