Posted by George Soules on Dec 18, 2013 in Architecture, Places

Our friends keep asking us for pictures of our home. Here's what it looked like this morning after the second of two back-to-back snow storms. The house was built in 1931 and that's about all we know of its history [see update below]. It does seem that every recent owner has done something to improve it and we are trying to keep up the tradition. Downstairs there's a kitchen, dining room, living room, bath, pantry, and a heated porch (the far left window in the picture) that doubles as both guest room and Janice's sewing room. Upstairs we have three small bedrooms (with miniscule closets) and a bath. We use one bedroom to sleep in, one for an office, and one for guests. So you see friends, there's a place for you to stay.

The road at left is Forest Ave. As far as you can see into the picture is the end of the road where it intersects Main Street. Our driveway in Vermont was that same distance and we had to have it all plowed! In the photo it looks like we are all by ourselves, but there are houses on both sides of the street. Directly across from us are some apartments and just above us (from where I took the picture) are Anna's Quietside Cottages which are mostly summer rentals, though this year we have one winter neighbor there. People rent these 11 cottages, each one beautifully decorated in local and world travel themes, by the week when vacationing on Mount Desert Island. In other words, they pay a lot of money to stay next door to where we get to live everyday!

Once you make the two-minute walk to Main Street, you can turn right and walk into Southwest Harbor in a few minutes more. There we have our bank, post office, library, drug store, market, hardware store – all the necessities. There are also some inns, galleries, gift shops, a bakery, and an ice cream shop, but most of those close for the winter. Go left on Main instead of right and in about 30 minutes you can walk to various locations in Acadia National Park to hike, swim, or just enjoy the scenery. During the summer months, the free Island Explorer shuttle bus runs from "downtown" Southwest Harbor all the way to Bar Harbor and to many other locations on the island.

Update on Jan 8, 2014 — I just learned something about the history of our house from my new friend Charlotte Morrill, one of the curators of the Southwest Harbor Public Library's collection of historic photographs. 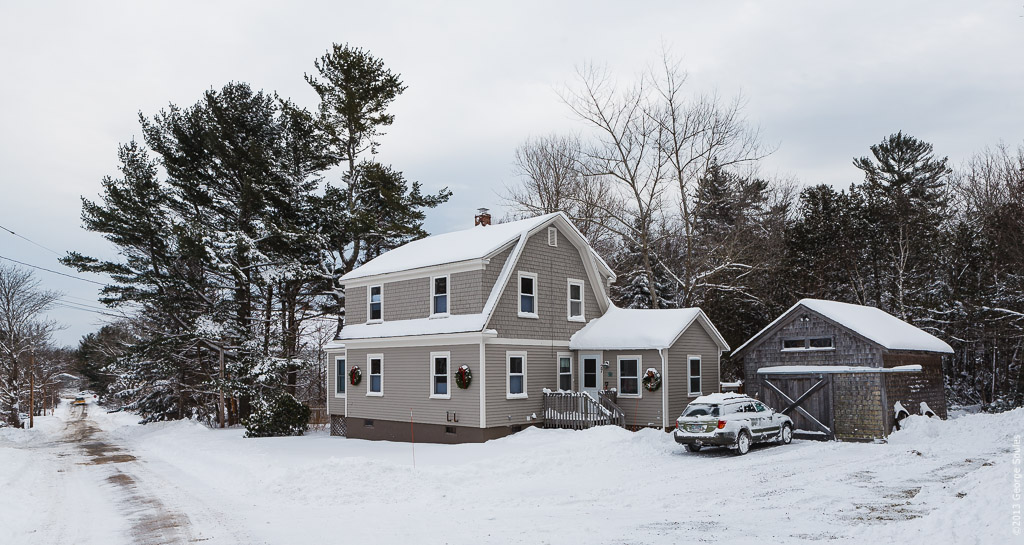