Posted by George Soules on Jun 1, 2016 in Architecture

La Rochelle is a beautiful and elaborate “cottage” on West Street in Bar Harbor. Built in 1902 for George S. Bowdoin, a great-grandson of Alexander Hamilton and a partner in the Morgan Bank, the mansion was named after the Bowdoin family’s ancestral town in France. The most recent owners, Ruth and Tristram Colket, donated the structure to the Maine Sea Coast Mission in 1972 with an endowment for its upkeep. La Rochelle was renamed and dedicated as the Colket Center in 2006. It now houses the Mission’s administrative offices, classroom and meeting space, as well as historical artifacts. The top floor, formerly the servant’s quarters, serves as the organizing and storage area for the multitude of gifts the Mission distributes as part of its annual Christmas Program.

I had the privilege of photographing La Rochelle to create a postcard for the Maine Sea Coast Mission. I used a Canon 5D Mark III DSLR with a Canon 24mm tilt/shift lens and a B+W circular polarizing filter, all mounted on a Really Right Stuff tripod. Mission president Rev. Scott Planting and Development Assistant Anna Silver directed traffic around me as I stood in the middle of West Street to take the shot.

Following the photograph below is the text of a 1902 newspaper article that says “This cottage is being built of brick, and is only the second cottage of that material to be erected in this vicinity.” By pure coincidence, last March I photographed the first brick cottage, The Callender House, which was built in 1901. 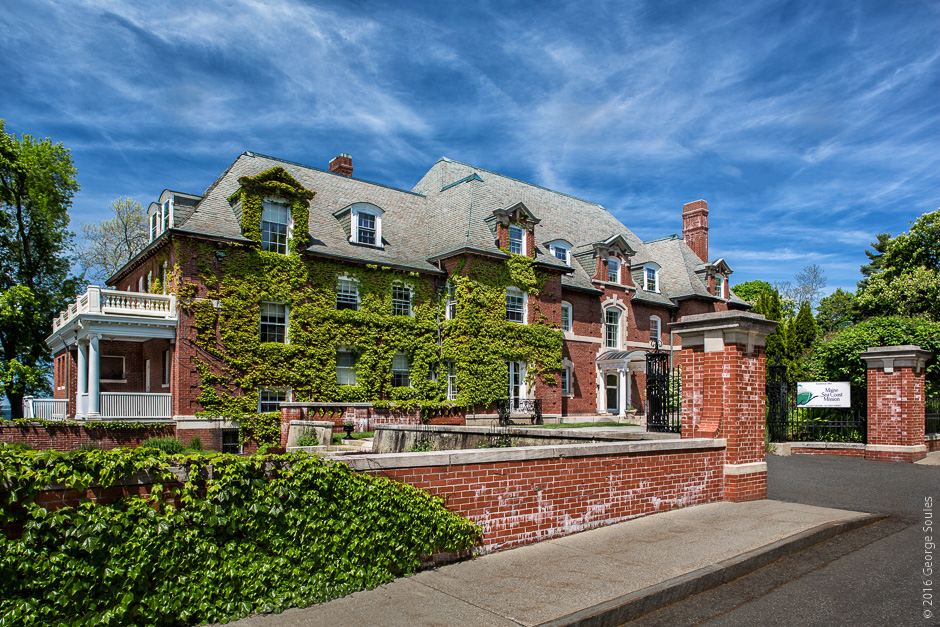 The article that follows appeared on page 1 of the July 16, 1902 issue of the Bar Harbor Record. It comes from the Digital Archives of the Friends of Island History.

The past winter and spring have seen a large number of cottages finished and begun in Bar Harbor, and the buildings have all been on a more elaborate scale than ever before. Two new cottages were built at Pointe d’Arcadie, the shore path has been made more attractive by the addition of a. new cottage, while almost every one of the streets back from the village has seen at least one new building.
The most beautiful and elaborate of the cottages that were begun this spring is that now being built by Mr. George S. Bowdoin of New York on West street, just east of Eden street. This cottage is being built of brick, and is only the second cottage of that material to be erected in this vicinity. It will probably be given the conventional name of cottage, but in reality it comes near being a mansion. The approximate cost of the building is $100,000, but before it is completed the cost will probably far exceed that.
The site of the building is a most excellent one, just in the break of the bay. The building will command a charming view both of the bay with its many beautiful islands, and its ever changing waters, and of the mountainous scenery back from the coast. A large retaining wall is being built along the high water mark, which will support a terrace running from the north side of the cottage.
As has been mentioned before the cottage will be built of brick. The trimmings will be of white stone. The house will be three stories high with an attic. The roof will be a high slanted slate roof, broken with a number of copper and wooden dormer windows. The pillars used in the support of the balconies will be of a modified Ionic style, with stone plinths and wooden columns.
The house was designed by Andrews, Jaques & Rantoul, the Boston architects who have been erecting a large number of public buildings throughout the east and west in the past few years. This firm has erected a number of the Carnegie libraries recently.
The main building, exclusive of the roomy kitchen wing, is about 75×50. On the front there is a porch which leads up to the entrance, and extends about half way along the front of the building. There are doors from the rooms on the front of the cottage leading to this porch. On the north side of the building there is a covered piazza, supported by Ionic columns, from which the bay may be seen.

The entrance leads to a square vestibule beyond which is a staircase hall. From this a circular staircase of 21 risers leads up either side of the vestibule. Beyond the staircase hall is a large square hall which leads to the balcony on the north side of the building. These hallways run straight through the building from front to back.
To the right of the staircase hall is the flower room, which leads to the reception room, which is about 18 feet square. A small cozy room separates this from the living room, which is 27 feet 3 inches long and 18 feet 10 inches wide.
On the left there is a coat room, and beyond a den about 16 feet square. Opposite the living room is the dining room which is 27 feet 3 inches by 18 feet 10 inches. To the left of these rooms is the kitchen wing, containing the butler’s pantry, the servant’s dining room, the kitchen, the coal room, and a number of closets.
The second floor is devoted entirely to the rooms of the family and guest rooms, of which there are three on this floor. Each room connects with a bath. On the third floor there are two guest rooms, eight rooms for maids, and rooms for the men servants.
The foundation, which is wholly of granite on a concrete foundation, is now about completed. Most of the other basement walls and partitions, some of stone, others of brick have also been built. The builders have already a good supply of brick on hand, so that there will be no delay in the work on account of lack of material. A good force of men has been at work on the building ever since the construction began, and if the work continues at the rate at which it has been going, the walls should be completed by the middle of September. The house will not be finished, however, until well into the winter. But when the Bowdoin cottage is completed it will be one of the places to take visitors to see.
A large mass of material for the building arrived on Sunday, and attracted considerable attention at the wharf. There were 40 or 50 cases of stone for the house. One of the problems in connection with brick and stone houses is the getting of material, and is also one of the large expense items.
The Bar Harbor firms connected with the building are A. E. Lawrence, the carpenter and painter, and George Wescott, the mason, E. B. Mears is superintendent of the construction. All of the contracts have not yet been let, and no doubt our home dealers will come in for a fair share of the remaining ones.

To learn more about the history of La Rochelle and view architectural drawings and photographs, see the Downeast Dilettante post What Survives: La Rochelle.