In June 1613, French Jesuit missionaries attempted to establish a colony on Mount Desert Island. Convinced by Abnaki Chief Asticou that the current day Fernald Point would be an excellent location, they came ashore, celebrated mass, and named the place Saint Sauveur. Presumably the reference is to our holy savior Jesus Christ and not to an actual saint since, to the best of my knowledge, none has this moniker. Nowhere is the choice of name explained in the many sources I've read on this subject, but much has been written about the events that took place there during the next three or four weeks. In brief, the English were not keen on the idea of a French settlement on their turf, and upon learning of it, they attacked with the 14 gun ship Treasurer, thus putting an end to the mission. The details of the "battle" and the subsequent fate of the 40 or so missionaries makes for some interesting reading, which I encourage you to do starting with Samuel Eliot Morison's The Story of Mount Desert Island and Traditions and Records of Southwest Harbor and Somesville by Nellie Carroll Thornton. However, since this is a photography blog, I feel compelled to now write something about the pictures I took. Being that it was Christmas morning and the rest of my family was still sleeping, I thought that a pre-dawn visit to this once and perhaps still holy spot was the perfect way to begin the day and hopefully get some nice sunrise pictures.

As the crow flies, the site of the ill-fated Saint Sauveur colony is just a mile and a half from my house. Much of Fernald Point is privately owned, but while researching this topic I discovered that the middle section belongs to Acadia National Park. In the first small photo below, that area is clearly visible as the snow-covered field jutting into the water. It's accessible from Rocky Pasteur Lane which starts at the end of Fernald Point Road. The park boundaries are not marked so I used the awesome Motion-X GPS app on my iPhone to make sure I stayed on public land. The thermometer was reading 11°F and the wind was creating sub-zero wind chill. It was warmer the previous day when Emma and I snowshoed to the top of Flying Mountain to get a good look at the Jesuit site from above and see nearby Valley Cove with its view of Saint Sauveur Mountain (first three small pictures below). But today it was just me and a bag full of camera gear. I hiked from my car to the shore, set up the tripod, and waited. Thank God for the unholy-named Little Hotties hand warmers I brought to keep my digits moving just enough to press the tiny little buttons on my Canon 5D3. As the sun began to rise I shot with the 17-40mm zoom and then switched to the 70-200mm to capture the Common Eiders flying in formation in the large image below. The scene was spectacular enough as it was, but when these sea ducks flew across The Narrows in such an orderly fashion, I wondered if the picture I was getting was a Christmas gift from the spirits of those who had stood on that same ground 400 years ago. 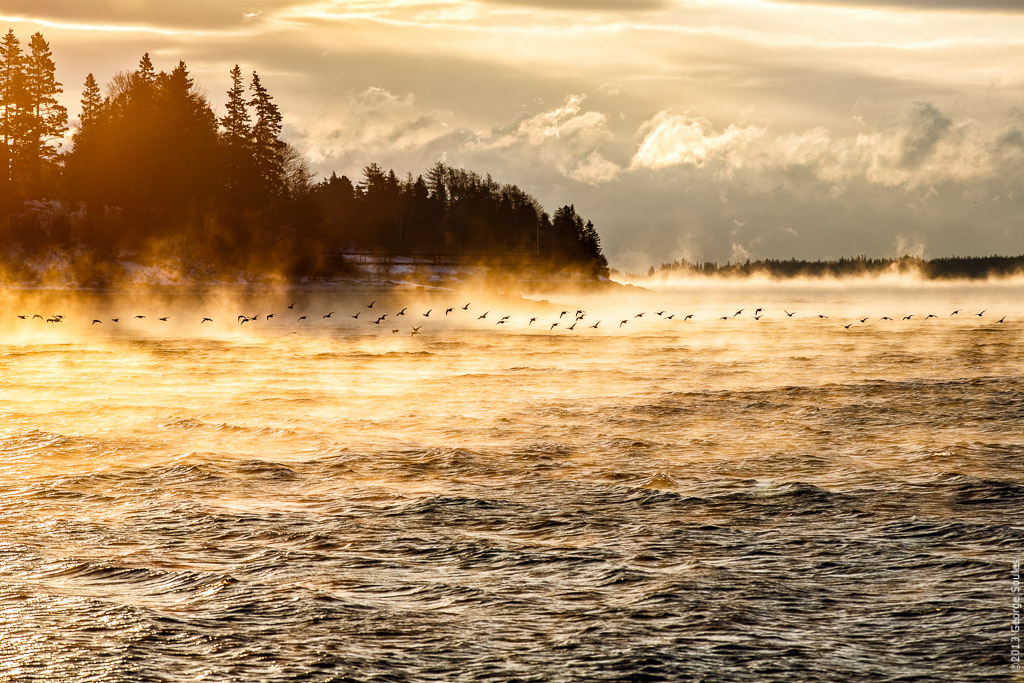